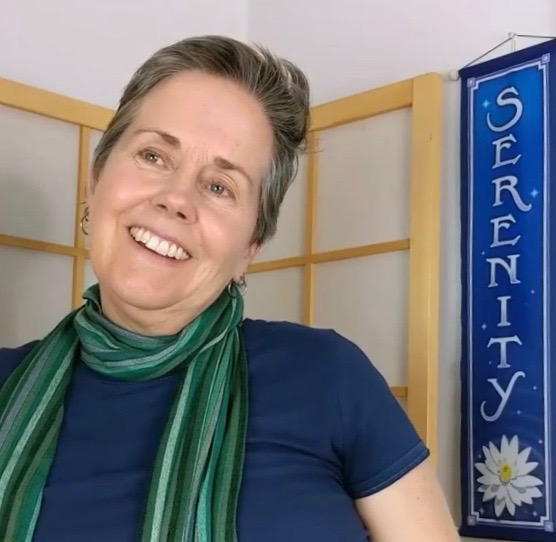 Lyralen is passionate about social justice. Their work as an actor, educator, activist and writer supports the same vision: truth in storytelling and equality for all people. They are also the show runner at Another Country Productions.

One reviewer of their work says “…[Lyralen] takes up so many difficult topics with such a strong sensitivity, finesse and power and at the same time makes you want to both laugh and cry.” We spoke on my Embark podcast last week about her groundbreaking web series Assigned Female at Birth. They answer a few more questions here.

LS: Talk about the genesis for your show Assigned Female at Birth: What was the impulse to create this format of short episodes containing something similar to a Greek chorus?

LK: AFAB was born in a conversation I had with Clare Solly, who plays Melanie. We were brainstorming about maybe collaborating and she said I should be the writer but she was really only interested in something about body image.

Clare is primarily a theater person in NYC—she runs the Bechdel Group among other things. And we didn’t know how long the pandemic would last. So I started writing using devised theater techniques, including the chorus. If we ever go to stage, some of those choruses will be movement and multi-media, but as it became clear that 1) the pandemic wasn’t going anywhere and 2) the interviewees would never all be able to see it if it was and stage play and 3) that Zoom plays really sucked and were hard to watch, I started creating with this idea of a hybrid. The limitations of filming remotely meant tight scenes with one shots, no wides, no two shots, and no locations that weren’t pandemic-safe.

And I had so much material from the interviewees, and had come to love them for their openness and their lives. So the chorus was born. I decided on a narrative structure with choruses that wove in and out…and after the first read through it became apparent that there needed to be spillover for the choruses to be as interesting as the narrative. So I carried narrative relationships and revelations into the choruses and they started to work.

LS: Creatives have to be so careful about what they produce, as they may be criticized for appropriating a culture or misrepresenting a group. I’m a big believer in the power of the human imagination. How do you as a writer balance both ideas

LK: In A Room of One’s Own, Virginia Woolf talks about Shakespeare’s incandescent mind, his ability to capture women, men, poor, fools, royalty with equal authenticity.

We are living at a time of great social unrest, and we also live within a corporate culture— Hollywood is about profit, so if multiculturalism is in and will make money, we get multiculturalism. A watered down commercialized multiculturalism with the idea that it will be acceptable to most people.

Respecting BIPOC and trans people in particular, who have and do suffer so much, is so important.Period.

As an artist, however, I won’t be limited to my own story and my own affiliations (though frankly, as a triple minority, I can cover a lot of ground). I go where my imagination and heart take me, and in the end, the goal is work of integrity that I think is beautiful, truthful, and offers new insights. BUT, and this is the big but, I know my limits. I can’t write the black vernacular as a black person does. At this time, just being white (and not a rich established writer in Hollywood, so therefore an easier target for trolls) could exclude me from writing about people of color. But in my own lexicon of morality, I can write about whatever I want if I do it with integrity and respect…so I do what I did in AFAB. I devised rather than invented, and I let people with identities different than mine speak through my skill and talent.

Mind you, I’ve already been accused of cultural appropriation, because that’s what we do now—we accuse and judge. I would say I’m lending the benefits of my privilege as a white artist to other stories. Some people have said I’m appropriating those stories.

In the end, I like this definition of cultural appropriation: it is taking something for yourself without giving anything back. I make sure to give back.

LS: What did you learn about yourself as you continue to write, develop, direct and act in AFAB?

LK: I learned a great deal about my own non-binary identity as the interviewees and actors reflected myself back to me. I learned the queer community, especially the non-binary and trans community, had a place for me—that these people are my pack, my home, the one place I have ever felt I truly belonged. I learned that belonging is essential to any kind of happiness. I learned that the most oppressed, when they do the work of looking inside, hold the most insight about human life and have the most to teach us all.

LS: There are some shows and films that have featured characters or even focused on a protagonist from the LGBTQ communities. Many of them have not been widely discovered or viewed. What will it take for a series or film featuring LGBTQ as a lead to be mainstream?

LK: Easy answer: Money.  And then someone with money in the mainstream willing to take a risk.

The films that have been accepted in the mainstream and have made the kind of money Hollywood and distributors like to see are: Carol, Call Me By Your Name, The Kids Are Alright and Love, Simon.

These films are terrible compromises and I don’t like any of them. They all have stars in them (except Call Me by Your Name), which gives films a better chance even if the stars are straight, miscast, and have no chemistry. They all feature a great deal of family or heterosexual content, and they are all about some form of coming out.

The troubling answer is that the gatekeepers to the mainstream are still white straight men, and the white straight women producing films in rebellion, and even some lesbians, produce to this common opinion of what the zeitgeist can handle. And the thing is—they really don’t know. It’s all a guess. And straight men and women seem to identify only with themselves. When Reese Witherspoon’s company produces a film that doesn’t star her and features queer content, I’ll start believing in her as an ally.

Previously, films like Fried Green Tomatoes only implied a lesbian relationship. No kiss. Nothing explicit. Previously that was seen as the only possible way to have gay content.

LS: We hear and see more people asserting their gender as non-binary or gender-fluid. How much do you think changing gender roles have affected gender identity? What trends do you see going forward?

LK: I think we’re in a gender revolution. In indigenous and African cultures there were often many genders…the only question is how well we will push forward in redefining gender and whether we’ll survive climate change. (Much longer answer. MUCH. Maybe another time…)

LS: I look forward to that conversation.